admin
Join local historian Monica Kile on a stroll from Demen's Landing to the Vinoy as she discusses the transformation of the bayfront and ponders what the next 100 years look like as buildings grow taller and more people discover this jewel of Tampa Bay. Enjoy a blend of historic photos and live on-site narration during the tour.

This tour originally aired on March 23, 2021 as a live broadcast from I Love the Burg. It is free and open to the public in partnership with the City of St. Petersburg.

From its earliest years as a gritty working waterfront filled with ships and smokestacks to today’s glittering promenade teeming with tourists, St. Petersburg’s public waterfront reveals fascinating details of the city’s history.
Learn how one man worked to transform it from a grubby rail and shipyard to one of the largest public waterfront park systems in the country and hear hidden stories about local landmarks like the Pier, the Vinoy, and the prettiest public restroom you’ll ever see. You’ll also hear about the things we don’t see anymore, like the waterfront’s segregated beach and the grand hotel that Hollywood blew up. 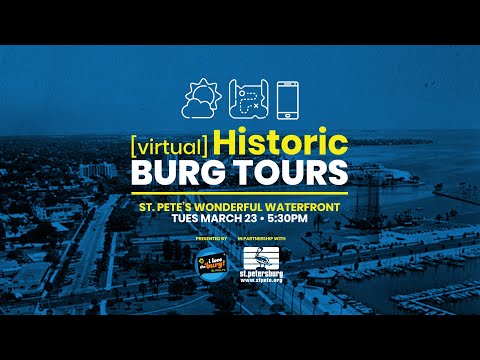 Join local historian Monica Kile on a stroll from Demen's Landing to the Vinoy as she discusses the transformation of the bayfront and ponders what th...