admin
Saint Petersburg City Walking Tour: Vasileostrovskiy District, Street 8 line.
This video is a continuation of a walk along 8 line street in St. Petersburg (Russia) on Vasilievsky Island (Vasileostrovsky District).
Our route will start from Maly Prospekt and end at the Makarov embankment at the old pier.
This area was supposed to become the center of the city. Many famous architects and sculptors worked on the creation of this area. Here is the building of the Twelve Collegia (project by D. Trezzini). At the beginning of the 18th century, it housed 12 colleges, the Senate and the Synod, and now it houses the St. Petersburg State University.

The Menshikov Palace is under construction nearby (today it is one of the branches of the Hermitage). The Academy of Sciences was built according to the project of Quarenghi.

Prince A.D. Menshikov ordered to cut a clearing from his palace in the west, to the Baltic Sea. This glade was named Bolshoy Pershpektiva, and later - Bolshoy Prospekt. The core of the district is made up of Bolshoi, Maly and Sredny avenues, which are intersected by lines of streets with numbers in their names. Until the 70s of the 18th century, the canals were located along different lines. The word "line" does not mean the street, but the side of the canal.

⭐ A day in St. Petersburg ????
https://www.youtube.com/playlist?list=PLGHZ-ON7_B5Bx9p3iakPlc0UPWFP68bIY 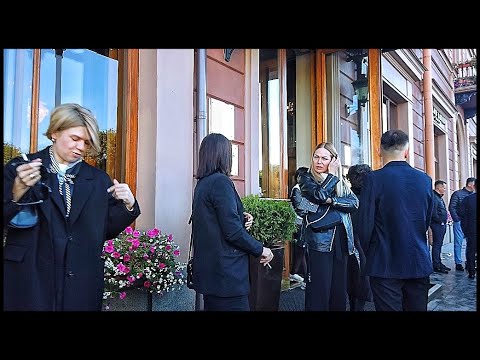 Saint Petersburg City Walking Tour: Vasileostrovskiy District, Street 8 line. This video is a continuation of a walk along 8 line street in St. Peters...